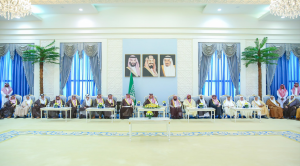 His Royal Highness Prince Ahmed bin Fahd bin Salman bin Abdulaziz, Deputy of Eastern Province Prince, in the presence of His Royal Highness Prince Saud bin Talal bin Badr, Governor of Al-Ahsa, honored the people’s gathering, which was held in the Al-Ahsa Governorate building, was attended by a number of Their Highnesses, Excellencies, officials and the people of the governorate.

During the ceremony, His Highness Deputy of Eastern Province Prince honored the strategic partners as below: