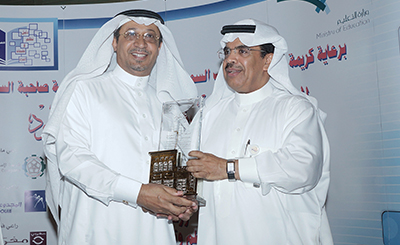 As part of Saudi Cement’s Corporate Social Responsibility (CSR) programs, Saudi Cement shared in sponsoring an Educational Conference in association with Ministry of Education, Eastern Province. Saudi Cement was the diamond sponsor of the event which was held under the patronage of HRH Prince Saud Bin Naif Bin Abdulaziz Al-Saud, Governor of Eastern Province. In an honoring ceremony which was held at Hotel Sheraton Dammam during the month of August 2015, Saudi Cement was awarded with a special plaque for its contribution to the society, which was received by Relations & Support Services Manager (A), Mr. Abdullah Al-Dulijan on behalf of our BM&CEO. The Ministry thanked and appreciated Saudi Cement’s efforts in supporting the social cause.